The McLean Area Branch has a special interest in encouraging young women and girls to pursue educational opportunities related to STEM (Science, Technology, Engineering, and Math). See our STEM Resources page for ideas on STEM projects, events, camps, and more! For further information, contact us.

Some of our activities include:

We also participated in the 2019 “Women in STEM Celebration & Share-a-thon” sponsored by the AAUW Woodbridge Branch on June 1, 2019. 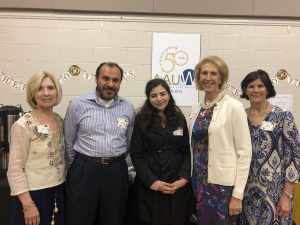 Hana Abouelenein, a sophomore at Langley High School, was selected as the 2019 recipient of the Branch’s STEM Excellence Award. The STEM (Science, Technology, Engineering, and Math) Excellence Award is given to a female student or team from a high school in the McLean area with an outstanding science fair project in the field of Engineering. Hana received an award certificate, a $100 award, and recognition at the Branch’s 50th Anniversary Dinner in May at the McLean Community Center.

This year’s award recognized the work done by Hana on the project, “Creating a Neural Network that Differentiates Between Cancerous and Non-Cancerous Epithelial Cells.” Hana created a neural network, which is a set of algorithms designed to recognize patterns, that would use data about a skin cell’s characteristics, including its width, height, circumference, and color to predict if it was cancerous or not. Her goal was to have an accuracy rate for predicting cancerous and non-cancerous cells of over 80% and in fact with her work she was able to achieve 84% accuracy.

At the Regional Science Fair held in March, Hana received a Third Place award for her project in the category of Robotics & Intelligent Machines and a second place award in STEM from the American Association of Engineers of Indian Origin, in addition to receiving the STEM Excellence Award. Myrtle Hendricks-Corrales and Judy Page served as judges representing the branch at the science fair. The McLean Area Branch has partnered with counselors at local High Schools for the last six years to award Science and Math Achievement Awards to female students finishing their junior year. These awards, which are funded through our book sale proceeds, consist of a certificate and a check for $100 for each honoree.

For 2019, the awards process was managed by a committee consisting of Mimi Gronlund, Myrtle Hendricks-Corrales, Heather McCallum-Bayliss, and Judy Page.

The awards are presented at each of the high schools by representatives of the AAUW McLean Area Branch. The branch instituted the awards to encourage young women to pursue educational opportunities related to STEM (Science, Technology, Engineering, and Math).